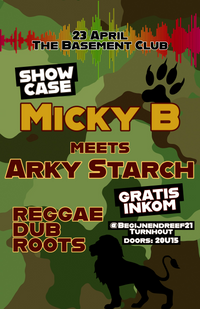 Give me the empress

Cry for Love & Unity is Micky B her debut album that is released during one year working along side Arky Starch. It will be released on the 14th of January on the Roar like a bass label. All tracks mastered @ Renegade studio by DUBMATIX. Danny Elmes (toured with Yabba You) plays guitar on "Power Abuse". Wim Roelants plays guitar on "Pick it

Cry for Love & Unity is Micky B her debut album that is released during one year working along side Arky Starch. It will be released on the 14th of January on the Roar like a bass label. All tracks mastered @ Renegade studio by DUBMATIX. Danny Elmes (toured with Yabba You) plays guitar on "Power Abuse". Wim Roelants plays guitar on "Pick it up".

Mireille Boudewijns aka "Micky B", is a singer/songwriter and recording artist from Antwerp.

Her voice has been noticed by various artists which gave her the opportunity to be the support act for Rebellion the Recaller, Charly Black, Macka B, Cocoa Tea and I-Wayne.

She is proud to announce there are some fun collaborations to come.

This Turkish/Belgian songstress combines heartical  messages and positive vibrations with a touch of militancy.

Her sweet vocals and lyrics are her trademark to the point you can call her a modern day "Griot".

She tells stories as reminders of the past, shares experiences, gives guidance and preaches oneness wherever she goes.

Micky B's discography includes 6 singles with producer Arky Starch, who can be found on her debut album "Cry for Love & Unity" and a remix of the Dubpistols feat. Rhoda Dakar "Stand together".        mailto:mireilleboudewijns@hotmail.com

Born and raised in Belgium (Turnhout), Arky Starch is an accomplished bass guitarist who also plays guitar and keyboard.

Some quotes on his latest release STIGMATA:

".....you know I'm down with this!" - Don Letts (legendary director/dj/music producer) BBC Radio 6

His artistic journey began at a young age, with his older brother Lowie buying him his first bass guitar in 1994. Membership of various bands followed. During these years, he honed his skills as a bass player and a musician. Along the way, he also collaborated with Heartwash, Ion Youth and Yosa (Dub Tales) to name a few. These experiences helped him expand his musical knowledge above and beyond the realms of just bass guitar and composition, harmonization, and the rudimentary components of Roots and Dub. In 2004 Starch began to branch out as an artist, focusing on understanding the use of software, MIDI, and technology to create complex, intricate music.

Since June 2020, he has worked with Jesse King aka DUBMATIX, to master all his songs and to assist in building a solid sound for his musical production.

Arky Starch’s discography includes ‘Dub Faith’(debut-EP) and a full album ‘Give it a Walk’ ft. Ragga Yves, a debut album, ‘Soul Sensi,’ on the Dubophonic label and 6 singles & her debut full album “CRY for LOVE & UNITY” with Micky B.

20th of April "GROW A PLANT RIDDIM" ep was released in collaboration with ZOOLOOK aka Nicolas Da Silva the founder of Irie Magazine. Featuring on this ep are Samora, Razteria, ZOOLOOK and Micky B.

Currently I am working on a version with Zoe Mazah.

29th of April "BASS IT UP" (Arky Starch new album) will be released.

At this moment we are preparing our LIVE act and recording new material.

We are looking for places to perform to promote Micky B's debut album "CRY FOR LOVE & UNITY" & Arky Starch his new album "BASS IT UP", our performance consists of +- 1h reggae and dub music. Arky controls the track/effects while Micky B chants her wonderful lyrics and harmonies. We choose this format to be productive/compact and to have the best sound live. This format also allows us to play in smaller venues and for organisations with smaller budgets.  One love and hope to hear from you soon!

For more info/technische fiche please contact us with the details below.